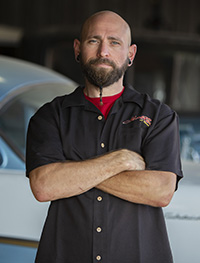 Like every young boy Zach always liked cars & trucks. He grew up in Texas City, Texas and says that out of necessity he says he learned to work on vehicles with his dad and hasn’t stopped learning.

Zach always wanted to restore classic cars, just never found a place in his younger years that would give him a shot. So, like most able-bodied men with a soon to be growing family, he went to work in the Refinery Field as a Mechanic, then a Boiler Maker & Pipefitter. Zach learned lots of thing and saw a lot of places, but work was never close to home. Then he had an opportunity to meet us, the Muscle Cars of Texas Team, and we decided to give him the chance to show us what he can do. Zach has shown initiative and excitement when it comes to learn the craft that he really enjoys – and it shows! He says he values the ability to help bring people’s dream car to fruition, as well as the satisfaction of a job well done.

Zach says he has not had time to work on a car project for himself yet, though he has helped many friends, family members and neighbors get their cars up and running when needed. He really looks forward to showing his notable accomplishments here at Muscle Cars of Texas. Zach has built, lifted, and lowered trucks and cars before, but says they were nothing like the beautiful rides here at Muscle Cars of Texas. Although, he does say that his greatest accomplishment will always be, his daughter.

Zach’s place on the Team here at Muscle Cars of Texas is Mechanic Technician, and he can work on a little bit of everything. One of his best abilities is to problem solve and will not be stopped until the problem is solved and believes that it is important to put out the ‘best’ possible product for the customer.